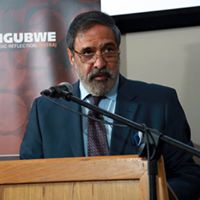 The Mapungubwe Institute, in partnership with the University of Johannesburg, hosted a lecture by Anand Sharma, a former Minister in the Indian Government and currently Deputy Leader of the Opposition (Indian National Congress) in Rajya Shabha, the Upper House of the Indian Parliament. The lecture theme was: The Indian National Congress and the ANC- Shared Experiences as Freedom Movements and the Challenges of Governing Pluralistic Democracies.

Anand Sharma is a lawyer by education and has been a prominent public face of the Indian National Congress and was Chief Spokesman of the party for six years. He joined the Union Council of Ministers with responsibility of Foreign Affairs in January 2006 and has since held Ministerial assignments in the UPA Government. From 2009 till May 2014 he functioned as Minister of Commerce and Industry, with additional responsibility as Textile
Minister from July 2011 to June 2013. He is presently the Deputy Leader of Opposition in Rajya Sabha (Upper House of the Indian Parliament).