We are an independent think tank that takes a long-term view on the
strategic challenges facing South Africa, the continent and the globe.

Since its inception in 2010, the Mapungubwe Institute for Strategic Reflection (MISTRA) has
assumed a leading position in long-term, strategic and transdisciplinary research through
generating research and creating platforms for engagement. Our research, policy debates,
convening power and scenario planning expertise have assisted in finding lasting and
effective solutions to the challenges our country is facing.

We deliberate on socio-economic issues that have both a local impact and a global resonance. The Institute is founded by a group of
researchers, academics, policy-makers and former governance practitioners. Our think tank forges partnerships for intellectual exploration
that both bolster a fledgling democracy and push the boundaries of limited expectation of our fractured history.

An institute for research and reflection on domestic and global dynamics impacting on the advancement of South African society and humanity.

To advance South Africa’s development by addressing the complex challenges that straddle issues of nation-formation, economic growth, social equity, science and technology, and the country’s positioning in a globalised world.

A progressive Institute, broadly informed by the ideals of our Constitution to:

contribute to the mobilisation of society around a common vision

MISTRA carries out research that addresses the country’s complex challenges, straddling issues of nation-formation, economic growth, social equity and South Africa’s global positioning. The research is conducted through a process of engagement and facilitation, drawing on the wide range of available expertise in the country and globally.

MISTRA’s expertise and value-add encourages many in the public and private sectors to commission the Institute to undertake consultancy work on a range of issues of concern to policy-makers. Consultancy work includes requests from a range of government departments at national, provincial and local levels, private sector corporations and from universities and other research institutes.

Mapungubwe is a pre-colonial Southern African Kingdom which was located in the far northern parts of South Africa, bordering present-day Botswana and Zimbabwe. The people of this ancient Kingdom had a sophisticated state and economic system which included mining, advanced artisanship and agricultural activities. They also traded with countries such as China, India and Egypt.

The story of Mapungubwe speaks to structured thought and development processes. It also contains lessons about the ebbs and flows of human civilisation. MISTRA’s logo – the golden sceptre is one of the artefacts found in Mapungubwe representing the authority and wisdom of leadership in communion with society – as its motif.

Independent and strategic high-level interrogation of issues in an atmosphere that is free from the pressures of immediate application, considerations of sources of funding or narrow sectoral interests.

The Council of Advisors consist of highly respected South Africans who act as an advisory reference group on the broad direction of the Institute’s work – contributing to the strategic content of its endeavours and enhancing the promotion of the Institute’s profile domestically and internationally and assisting in building partnerships in South Africa, on the continent and globally.

The Board of Governors has a mandate to exercise oversight on matters of governance. The Board exercises fiduciary responsibility in relation to the Institute by ensuring that the Institute operates in accordance with its relevant laws, regulations, and corporate governance principles and Memorandum of incorporation. Its general mandate is to supervise management of the Institute and ensure that the best interests of the Institute are served.

The MISTRA Fellowship system has been established to bring experts in a variety of fields as researchers on specific themes or high-level partners in the content work of MISTRA. Such experts are designated as Fellow of the Mapungubwe Institute (FMI). They work with and at MISTRA as and when the need arises for a fixed duration of two years subject to renewal.

Members of MISTRA Society of Researchers

The Mapungubwe Society of Researchers membership is conferred to deserving candidates selected by the Institute for demonstrating active support for its objectives and for participating in its research projects and other activities.

MISTRA’s long-term sustainability depends critically on the generous support we have received from various institutions and individuals.

Join us! Find out how you can support our work. 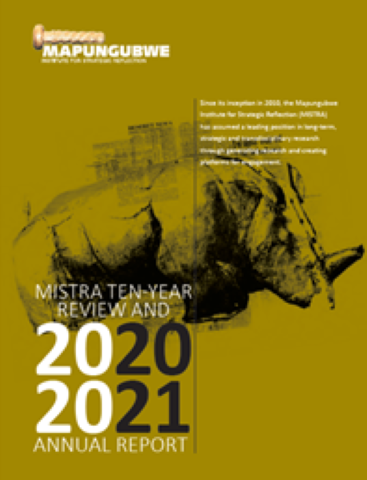 Eleven years ago, when we established the Mapungubwe Institute for Strategic Reflection (MISTRA), we characterised it as ‘an idea whose time has come’. This was based on our assessment of the critical importance of long-term strategic research. But we did not, at that stage, anticipate the overwhelming interest among various sectors of South African society in high-level intellectual engagement which draws from various systems of knowledge and is not constrained by short-term considerations.

As MISTRA was commemorating its tenth anniversary during the 2020/2021 financial year, the world was beleaguered by the COVID-19 pandemic. This experience has further reinforced the centrality of an effective ‘think industry’ within our country and across the globe. It has confirmed MISTRA’s unique and timely addition to the landscape of strategic research and discourse in South Africa.