The age of unreason and ignominy – can we judge the people’s judgement? The case of Brazil 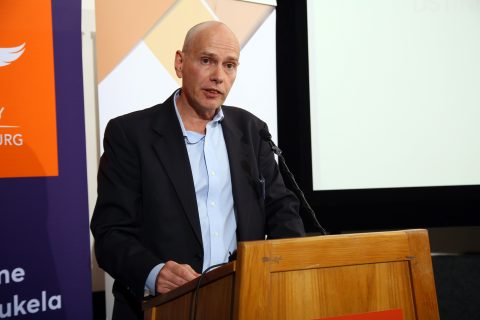 The 8th Mapungubwe Annual Lecture, The age of unreason and ignominy – can we judge the people’s judgement? The case of Brazil was delivered by Prof Giorgio Romano Schutte on the 4th September 2019.

Professor Giorgio Romano Schutte is a Professor in Economics at the Federal University of ABC (Universidade Federal do ABC), in São Paulo. He is also Associate Professor of the National Research Council (Bolsa Produtividade CNPq). His career includes experience in academia, public administration and the labour sector.  In the period between 2004 and 2006, Prof Schutte worked as an international advisor in the presidential office during former president Luiz Inacio Lula da Silva’s tenure. Before his career in public administration, he worked for 13 years (1987-2000) for the European and Brazilian trade union organisations in the field of research, policy advice and education. He has also worked for the government Research Institute of Applied Economics (IPEA); the private university Belas Artes de São Paulo; and the World Bank as Regional Advisor for South America of the Cities Alliance.

The Indian National Congress and...