Nervous Conditions: The Burden Of Race, Class And Gender In The Construction Of The Post-Colonial Order 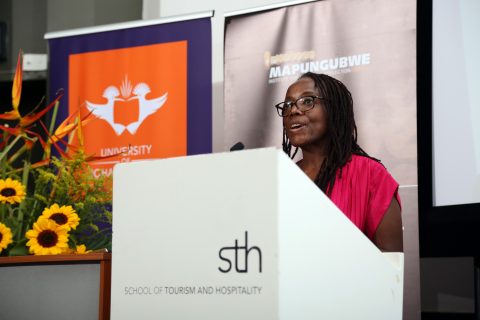 The 7th Mapungubwe Annual Lecture, Nervous Conditions: The Burden of Race, Class and Gender in the Construction of the Post-Colonial Order was delivered by Tsitsi Dangarembga on the 20th March 2018.

Tsitsi Dangarembga wrote her first novel, Nervous Conditions at the age of twenty-five. It was immediately acknowledged as a seminal piece of literature and was hailed by Doris Lessing as one of the most important novels of the twentieth century.

Dangarembga completed her education in her home country, where she worked as a copywriter before writing seriously as a poet and playwright.  She published her second novel The Book of Not in 2006. She obtained her Masters in Filmmaking from the German Film and Television Academy Berlin.

Dangarembga lives in Harare where she founded the production house Nyerai Films and the International Images Film Festival for Women. She also founded the Institute of Creative Arts for Progress in Africa where she works as director, and her own publishing house, ICAPA Publishing in 2014 with a collection of short stories, A Family Portrait, that interrogate the many endemic forms of violence in Zimbabwe. Her contribution to the collection is a short story called The Brick. She is currently writing Sai-Sai, Watermaker, a dystopic speculative fiction for young adults.